This is a digital publication that presents the processes involved in the
int e rv a lo – e s c o l a : in t e rv a lo em curso
research-residency intensives, in the states of São Paulo and Amazonas,
between November 2016 and February 2017,
as part of the National Network Program Funarte Artes Visuas 12th edition.

In SP, you can listen to the audio and read the (collective) script developed by the group of participants of this edition, fruit of the “Conversas-Coletivas” proposition of Ricardo Basbaum. Each collaborator also added different types of reference to each piece of this text-collective-collage, fermented alongside the conversations in Casa Tomada at Parque da Aclimação, and in the processing of food collected on a day of “xepa” (left-overs) and at the food table.

*The subcategories under which this body of references-body of text-body of bodies is arranged are: #body, #disobedience, #fermentation, #language, #xepa

In AM, we think of building this publication as the forest itself. From a common ground, manifested by a central text composed of multiple voices, the various branches of each one of us – a forest text – come out of the experience of the group between the House of the River Tupana and the Igapó-Açu.

We believe that the texts, images and processes shared here are the best way to publicly translate the intensity and multiplicity of exchanges experienced in this intervalo immersion.

Intervalo-Escola is a platform that maps and experiences modes of learning in / against / over / from the field of art. Interval events emphasize collaborative, cooperative, non-hierarchical, immersive, sensitive, and informal learning models. Putting ourselves always in the face of possible dialogues and antagonisms in relation to the formal practices and concepts of teaching. This is a school without a fixed place and that acts as an immersive temporary zone, in which each event is composed of groups, places, knowledge and specific contexts.
The Intervalo-Escola was created and has as central collaborators the researchers-etc. Cláudio Bueno and Tainá Azeredo.

Intervalo em curso is a project contemplated by the National Network Program Funarte Visual Arts 12th edition, aimed at artists, researchers and agents of the field of arts. The first stage of the program took place in São Paulo, in collaboration with Casa Tomada, between November 28 and December 18, 2016. And the second moment happened in Amazonas, next to Casa do Rio and the Forest Knowledge Center, supported By RDS Igapó-Açu, between January 23 and February 11. For each edition of the program an artist is invited to think along with the group the activities and strategies of knowledge sharing. In São Paulo, the immersion was developed with the artist-etc. Ricardo Basbaum, and in Amazonas, together with the artist and researcher Jorge Menna Barreto.

In the last days of September 2016 I received an email from my dear friend artist Maíra Dietrich. The message thread was following a conversation on experimental formats on #art-education, #mediation, #radicalpedagogy. I had been for long interested in the Brazilian contributions to this field, taking the Mercosul Biennial as a reference model in the expansion of curatorial practice and the creation of the educational-curator role together with the unique mediation core of the project.

“I also received this, is a project made by tainá azeredo and claudio bueno, two amazing creatures in são paulo, about education in art. i guess it could interest you as well…”

The call
I quickly responded to the Chamada Aberta (open call) of the program Intervalo-Escola : Intervalo em curso which was inviting artists, curators, managers, teachers and researchers to apply for the first edition of a learning program  in / from / about / arts, to be held in São Paulo between the November 28 and December 18, 2016. For this first immersive process of teaching and learning activities would be developed with the artist Ricardo Basbaum.

The first immersion period I applied for would be hosted at the Casa Tomada (located in the neighborhood of Aclimação) and may happen organically in a network in other spaces of the city. Immersion was an opportunity to research and share individual / local / specific knowledge for a group of up to 8 selected participants who will work together with Intervalo-Escola staff. Participants were expected to contribute actively to the construction of collective dynamics as well as to share their individual experiences.

I immediately liked the application format, the selection process would be based not only in the project’s trajectory of the candidate but in a knowledge-sharing proposal that could be applied to the development of the Intervalo-escola residency process. In addition, we had to choose three important references as footnotes contextualizing our own practice.

The residency-program
The residency lasted 21 days. The timed elapsed quickly around an invertebrate program proposal based on the intensity of the group encounters, where participants would take ownership of it.  The sessions were articulated around the body of references and experiences that the group of 8 participants applied with, together with a meta-reflection on the name of the program itself as a guiding principle: in Portuguese Intervalo means break (school break). The residency’s curatorial proposal stands as a reflective methodology within the politics of study, understanding the intervalo as a critical gap/parenthesis/digression – raising skepticism towards a culture of material production and thus, vocalizing the need of evaluation as a continuous self-critic mechanism and accumulative process (like a process of fermentation of the human spirit) embedded in contemporary artistic research practices. 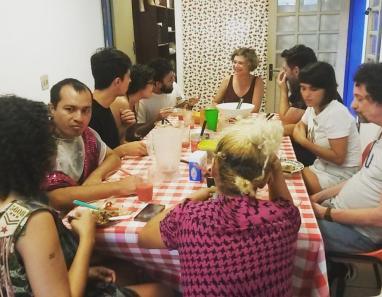 A common vocabulary of interests and intersecting research lines evolved and some words took a more prominent role than others. A layer of further references was built upon that initial vocabulary, delivered to the group in the form of individual presentations by topics and days. The daily conversational routines were occasionally enriched by some knowledge-sharing proposals; exercises which expanded on topics such us: translation as collective scenario, fictional and automatic writing proposals, the subjectivization of public space, schools run by artists, and fermentation workshops. 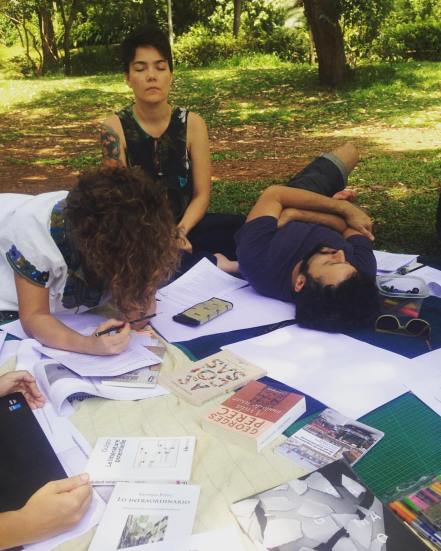 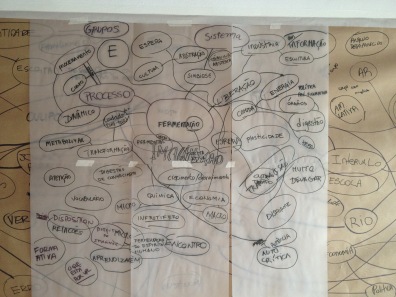 Some key questions started to shape what will later become the Intervalo Publication: is pedagogy the right place to speak about ethics? how can we decolonize knowledge? how can we bring knowledge back to the body as the center of experience and education? how to redistribute power, bypass industrialization and sustain a micro politics of self-organization? what are the peripheries of language/memory/narration/space? can we live outside the limits of heritage and (cultural) representation? Can we translate a text without “killing” it? Can we trust the author? How to appropriate his process? What forms of reciprocity opens a conversation? Is imagination a form of empathy?

The program activities
The program included a visit to the 32nd Bienal de São Paulo – Incerteza Viva [Live Uncertainty]; where we talked with Bienial co-curator Sofia Olascoaga, who gave us insights into the art-education processes informing the Bienal and her involvement in the discursive line related to collective intelligences and collective works. We were received by artist Lais Myrrha and her powerful work “Double-Standarts”, which was in direct dialogue with the architecture of the bienal and we had lunch and a conversation at RESTAURO, the artwork/restaurant project by artist Jorge Menna Barreto and the collective Grupo Intero, who made the spatial installation for RESTAURO following the idea of microclimates and introducing the context of Floresta inside the Bienal.

Back at Casa Tomada, we participated in the XEPA action, where Raquel Blaque guided us through the specifics of this food recollection action and restoration technique around the food market of Parque Aclimação. 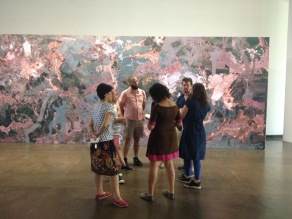 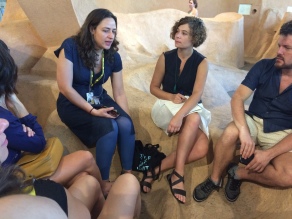 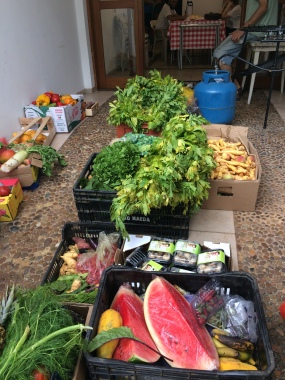 The program guest, Brazilian artist Ricardo Basbaum came to share his practice during two intense sessions of three days long; an intervalo within the intervalo. His working proposal, Conversas Colectivas, was introduced as a way to address collectivity and express the intense translation process of thinking together crossing in the temporary zones created by residency formats. Conversation as a “form of dialogue, as the desire to meet others and as the appetite for irreverence, as an exchange, as empathy, as seduction, as approximation, as poetics of play, and as a form of fluidity“. This fluidity would be later shaped in a text to be recorded and performed in front of an audience the last day of the residency.

>> Read more about Conversas Coletivas: “Collective conversations are actions that seek to integrate the writing of the text and its sound emission, in close proximity to the layers of discourse that cross the contemporary art work. Always in a group, in a multivocal and polyphonic way, trying to act in the field of rhythmic emission of the installation and its objects and diagrams, the collective conversations aim at the elaboration of a joint document, its public reading and recording. The audio file of the collective talk will be included in the work of the artist Ricardo Basbaum, after public presentation. forms of dialogue, conversation as desejo de encontro e bondade irreverente-troca-empatia-seduçcao-aproximaçao-poética en jogo-fluença and a formalist proposal, texto torna voz”
>> In Berlin you can find Basbaum’s publications at Errant Bodies

The publication
The final text was rehearsed during the morning of December 16th, and recorded in Trampolim Estúdio by Habacuque Lima. A 12 hours intense working session led to the final celebration of the Conversa Coletiva through the streets of the Bixiga neighborhood. Many hours of samba dancing and (unadvisable) cachaças later, we came back to Casa Tomada to set up the hosting of the public event.

The final Publication intervalo-escola SP (Sao Paulo) was designed integrating all peripheral conversations as a parallel system of notation to the central Conversa Coletiva. A selection of references gathered through the residency is now part of an online archive and the beginning of a study group.

A note for the future:
Interesting challenges of the residency such us how to monitor, document and shape these collective processes and “constellations of references” into sustainable formats accessible to the public continue to motivate my practice. From the experience of coordinating AFFECT – Agora’s program for collaborative artistic practices for three years, I gained new insight into participatory strategies and knowledge-sharing formats that better translate the idea of thinking-collectives as outcomes of the encounter (such as Conversa Coletiva). And restated the key importance of curating a group of participants, since the selection becomes truly the sculpting material for the affection of practices, exchange and future collaborations resulting from the residency experience.

A significant aspect of this residency experience that finds a direct correlation to my current projects is the discovery of orality and acoustics as a new peripheral and relational approach to language, memory and narration. Together with the encounter of the notation system as collective scenario, which I’m developing further in my project “The Dreamers“.