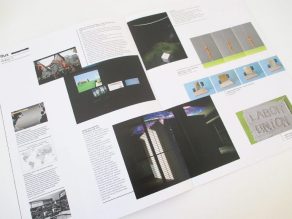 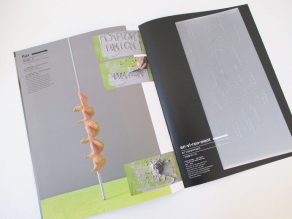 WORK WITH US is a multimedia installation and catalog by French artist Gisèle Gonon presented within the framework of the 2018 Goldrausch Künstlerinnenprojekt exhibition.

Aided by tools borrowed from the field of sociology, WORK WITH US displays a lexicon of critical approaches to interrogate “the world of work,” an ongoing concern traversing her artistic practice—work as: a human activity, a relational environment, a socio-economic status, an archaeological landscape. The repository of drawings, videos, sculptural pieces and publication composing this new body of work follow the logic of an atlas, that is: the logic of a shock (Georges Didi-Huberman). A work of montage where multiple temporalities, images and media come together. To aid the viewer’s orientation in understanding the secret links within the synoptic presentation of differences coexisting in this visual form of knowledge (the atlas), Gisèle developed three thematic trails: #flux, #environment and #process. This system can be read as an open operative model to excavate the multiple definitions of this semantic context and work with her through the constellations of meaning at play.

Growing up in a rural area in the south of France attached to the secular (ancient) economic model of the farm, her childhood’s territory permeates most of her works as a rough plastic statement: “We throw nothing away, we transform, we make assemblies, we recycle.” Fluctuating from heavily socio-economical undertones, to humorous, absurd and sometimes poetic gestures, WORK WITH US attempts to translate the paradoxical strategies embedded in this we-form around the idea of manufacturing from agricultural labor to the environment of today’s creative sector, unmasking the tensions and contradictions of our contemporary globalized society associated with it. From stone embankments to an after-hours desk, Gisèle invites us to join a group recruiting exercise, climbing to the top of the pyramid of personal development advertised by the start-up industry, highlighting simultaneous scales of production, producers, markets and intermediaries that characterize the language of both management models, represented not as a metaphor but as a mirage. An optical illusion calling us to look at and be reflected in the shimmering appearance of Berlin’s vitrine for contemporary work economies. In opposition to this (deceptive) horizontal hierarchy, Gisèle Gonon manually inscribes herself within the fluid surface of the work grid, developing a form of calligraphy with an economy of means in which she uses her hands as a measuring unit. An empathic meta-reflection to underline the louder and more quiet frequencies of “the world of work” and the “world of art,” where bulldozers are often found yawning after a hard day’s work.